Still confused. Do we need Regualar or Extended License for a Jobplattform with free and paid plans?

We will create a Jobplattform with Jobmonster. There will be a free plan and several paid plans for jobseekers and jobpublisher (as it is in the demo). 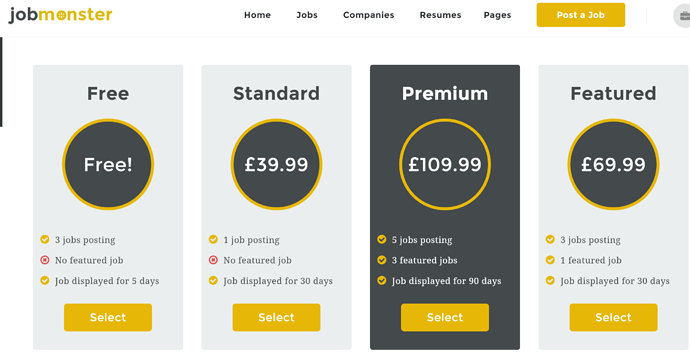 You don’t need to purchase Extended license. Regular one would be enough for you even if you decide to sell the service.

as far as I know, if you make money with the site, you need to get extended license, but ask the author

He doesn’t need to ask, he’s not selling the theme, he’s using the theme. One of the reason (feature) that any user is purchasing the theme is to sell the services. In your logic, for e-Commerce websites, buyers have to purchase extended license as well

Use, by you or one client, in a single end product which end users are not charged for. The total price includes the item price and a buyer fee.

Extended License
Use, by you or one client, in a single end product which end users can be charged for. The total price includes the item price and a buyer fee.

He’s not selling the item (theme/template) he has purchased from ThemeForest. He doesn’t need extended license.

If the paid for service allows access to parts of the end product (the website) which people can’t access if they haven’t paid… then you’d probably need an extended license.

You can charge people for stuff through a theme, on a regular license, if what they’re paying for isn’t access to all or part of the Envato item. So if it’s a clothes shop, yes, you’re charging people through the website, but you’re charging them for the clothes, not for accessing the website.

So if everyone has access to all parts of the website whether they pay or not, a regular license would be fine. If they have to pay to access certain areas or features of the site, then you’d probably need an extended license. I’d double check with support though, to be on the safe side.

“He’s not selling the item (theme/template) he has purchased from ThemeForest. He doesn’t need extended license.”

Just to note… you can set up a theme and sell it to a client on a regular license. That’s where the “use by you or one client” part comes in.

Regular or extended is only dictated by whether the end users are charged… the end users being the customers that visit the website, or watch the video, or listen to the music. If they have to pay to access that content, that’s when you need the extended license.

Well that’s not allowed with any license.

You mean the theme or extensions such as plugins as well?

Well there’s the exception for plugins if they’re going to be used in an Envato item. Or pretty much anything else if it’s part of a larger item, you’ve bought an extended license, and you have permission. But otherwise, there’s no license on any of the marketplaces that allow resale of the item ‘as is’. Especially not outside of Envato.

Maybe you know that anyway… it’s just that, although the info you have in your first two replies was spot on, the later ones kind of gave the impression that if you buy an extended license, then you can start selling the item on. That’s true in a few instances as mentioned above, but just wanted to make it clear in case anyone reading got any crazy ideas!

Resale may be possible with the themes as well. You could purchase the license, ask for the permission and use the codes to rebuild another theme with different design ( similar but not the same )

You could dispute this view and question the fact who realy the end user is?!?!

I would say that the end user is the visitor in search of a Job and who is not been charged for his search on the site.

This would mean that a regular license would be sufficient!

The end user is always the general public visiting a website.

That would mean that on a job boards and classified ads where people do not buy a subscription but pay for publication or a featured listing/ad and not a subscribed membership will only need a regular license and not a extended one.

If they would need a extended license one could ask themselves why sell them then in the first place with only a regular license as this would be useless, what I mean to say is we buy these themes, scripts, plugins to make money, selling ads, placing ads etc etc etc… like selling a t-shirt, bag or pants, but then in the form of selling a job listing or ad space.

or do I see it wrong now SpaceStockFootage ?

But if you use a theme or a script as part of some premium service and they need to pay money in order to see your usage of the theme/script/item, you need an extended license.

By content, he meant the end product, which is your usage of the item.

OK I understand that but why are some authors saying the next on a Classified Ads CMS scripts,

In ****** you as “Admin” can create promo packages with some options and a price: https://… …/admin/listings-packages

This promo package, is for a client as “User” to have his/her ad featured/promoted ( with the options from the promo package you set in admin interface above ) and pay you as “Admin” money for that package via one of the many payment gateways included in the script.

So, for the above behavior, meaning business/commercial scope you will need Extended License per legal agreement on Envato MarketPlace .

If you intend to use … for free ad listings without promo packages and only Advertising systems like Google Adsense or others then regular license is what you need.

A specially the last two aligns got my eye and I read the legal agreement but this is not mentioned there.

So big question, is it correct for the Author to state this in the item details and almost obligate everybody to buy an extended license?

Well actually, that might be a little different; the end product itself is an advertising platform.

If you want clarification from the legal experts I would suggest opening a ticket with our Help Team.