Blocked after disputing with author's failure to fix his script

Can anybody from envato side tell me why my account was maliciously locked after one of the authors of a script I bought failed to fix his script?

I would happen if you raised a dispute on the purchase with your payment provider.

Otherwise only support will be able to answer this.

Yes, I raised a dispute.

But I did so after the author failed to fix the script, screenshots available for my complaint.

Also the issue of the script was more of a security flaw.

However, the author of the script is circumventing the Envato refund system and even at this point, no progress was made.

Envato should likewise bar authors who sell flawed scripts to begin with. What’s the point of having a script selling labelled as “reviewed by Envato” if the script is filled with issues?

While I do sympathise with your situation, this is in the terms we all agreed to as buyers and I also understand envato’s situation in these cases.

Unfortunately, no one in the forums will be able to help except support, who, if you raise the issue directly with them, will review the file and help get your account active again

Yeah, however, the envato team did not exert obvious efforts to compel the author to fix the SECURITY ISSUE of his script.

And SECURITY ISSUES were supposed to be very valid grounds for a refund.

Anyway, I hope Envato can wake up and be fair to their clients.

REFUND REQUEST with Envato and DISPUTE WITH YOUR PAYMENT PROCESSOR are definitely NOT the same thing! The first one is a something acceptable and reasonable in case you’re right about the SECURITY ISSUES. The second one is in 99% of the cases fraudulent behavior.

P.S.: Sorry for the capital letters, but noticed you just adore them as an expression method.

The author’s failure to fix the issues (seemingly willful) is the sort of fraudulent thing.

However, the author seemed to have been “circumventing” envato rules through mere ministerial acts and nothing more.

And no worries about capital letters, we understand emphasis.

This is a development worth sharing - and my account has been reactivated by the way.

A picture speaks a thousand words, so here goes: 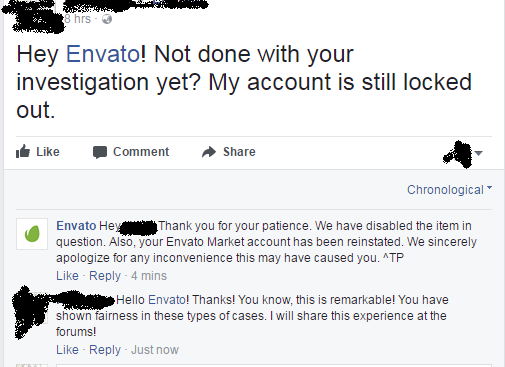