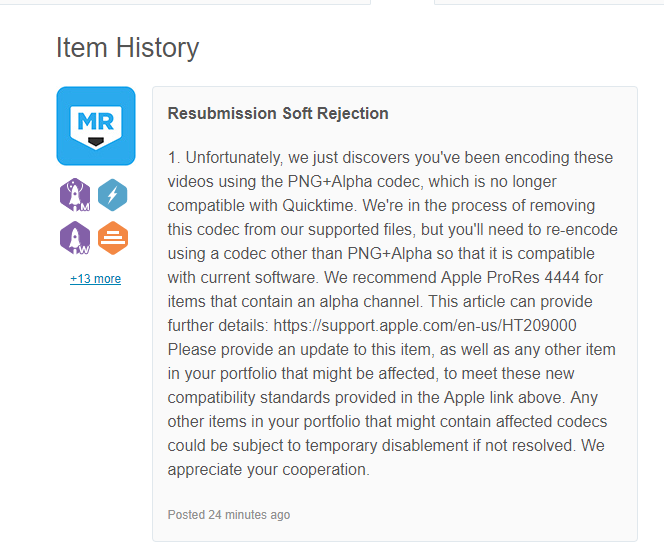 There is actually a built in preset for this. On the export screen, for Format, select “Quicktime”. Then for Preset, select “Apple ProRes 4444 with alpha”.

Actually, I did the same thing, but i got soft reject )

photoPNG with alpha codec is not accepted anymore by envato.

It is good if you do so, still Envato officially not announced, but I expect sooner or later Envato will announce

Do you know any workaround this issue? I would very much like to create smaller files

Thanks in advance,
Cheers

I dont understand why Apple has stopped to support PNG+alpha codec, ProRes 4444 file sizes bigger but internet and data transfer speed is increasing day by day so large files are no longer will be a problem, at least in the near future.

My problem isn’t the internet connection speed but the item’s file size limit.

Do I have to make renders with ProRes 4444 also in After Effects Project(prerendered flares for example) or only in motion graphics item ?

So far Adobe supports PNG, So no issues as of now, If they follow Apple Foot steps in future then all the assets used inside After Effects also needs to be changed to Apple Pro Res 4444, JPEG 2000 was removed from Adobe long ago, PNG will also have the same fate, when will it happen, only Adobe knows