Streaming from the Pool Concert

I just wanted to shamelessly share a concert streaming we did with my old “humorous but dead serious…” band “Ocean of Lotion” a few days ago. We were mainly active with our Colour Rock or Experimental LolliPop Rock in 2011/2012. We kind of decided to put the band in the “freezer” some years later, but the last year we have picked it up again working on some new songs and with a fresh excitement.

Out of the blue we also got a request from a Video director here in Norway (Jarle Hovda Moe) who wanted to make streaming concert with 12 of his favourite smaller bands in Norway to try help them reach an audience in these strange times. His idea for our band was to record a streaming concert in a Swimming Pool…! An idea which we of course loved

The video director is an absolute genius in my opinion and I was blown away what he managed to do with such a small almost non existing budget and of course with the help of lots of people volunteering. We also hired a drummer since we did not have any drummer at this particular moment, and I am so glad we did, what a guy

Things are opening up here in Norway more and more in terms of the virus, the Swimming Pool we recorded it in will open in June. Anyway, here it is if someone is interested to watch it. 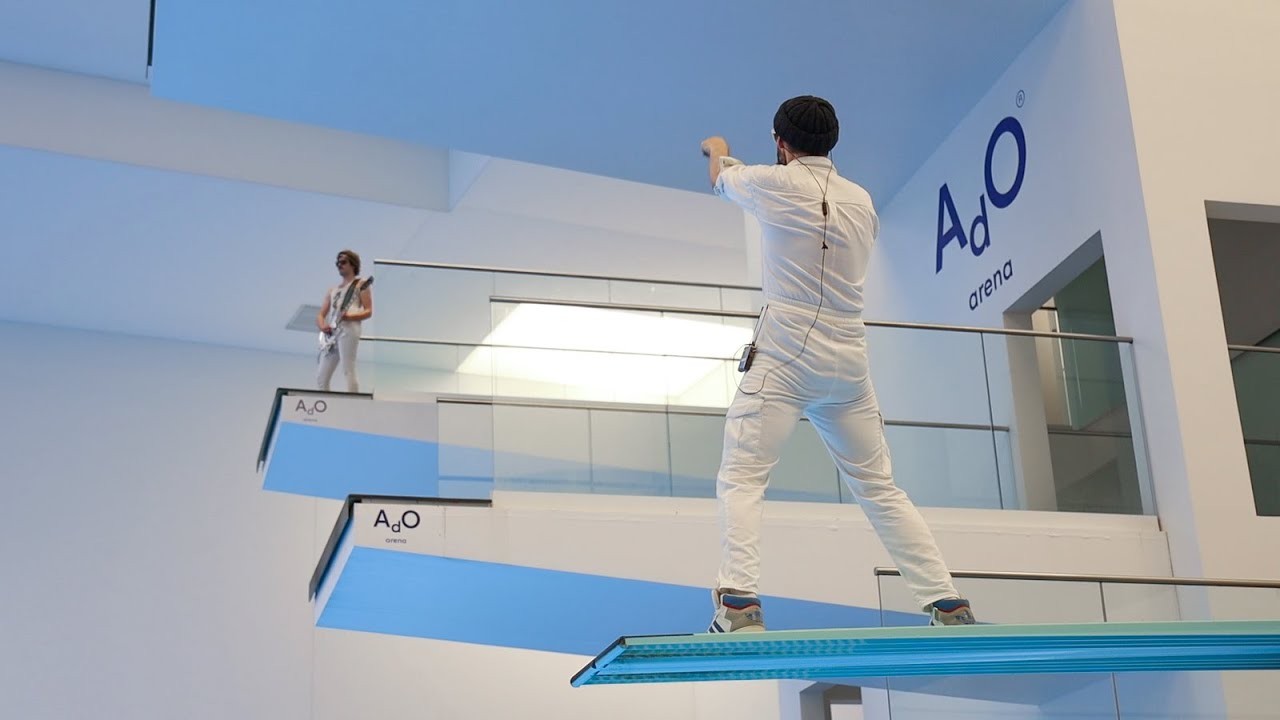 Loved it André. Awesome tone on that bass. Loved the cameo from Arnold Schwarzenegger too!

Cool, very happy to hear that!

The bass was actually having some issues with the sound, very clipping ish sound when it was clean so we decided to use distortion to hide the clip sound on every song. And it turned out pretty cool, like a 80s grunge sound together with the drums

So a happy accident there. I laughed so hard when I heard the drum sound, the sound guy was not exactly shy with the reverb effects

That is so cool! Looks like you guys had a lot of fun. I loved the attitude and the music. Just listened to the first song for now, but I will come back for more.
How was it to play in such a space? Wasn’t it a nightmare of reverberation all over the place?
Also, which one are you?
Anyway, congrats André!

Thank you very much!

I am on the bass guitar. And yes it was a lot fun, and frankly I was shocked to see the video and sound together for the first time. The budget for this was almost nothing and normally a production like this would cost a lot and something that would be out of the question for a tiny band like ours. So we are super happy with this gift from the video guys and everyone who helped.

Funny thing is that I first said no to the other guys about doing this gig at this point because I was stressed out and busy with other things, and we also did not have a drummer… But very happy they convinced me to push it through

The reverberation was as expected unbearable, so I don’t think a concert with audience would be doable there without any special solutions. But everyone in the band had in ear monitoring so for us the sound was great. It was probably not so pleasant for the video guys who only heard drums and 2 guitar amps in this kind of acoustics…

Wow man, that looks absolutely outstanding ! It sounds really good and visually is amazing. They got an excellent sound on the drums despite the huge place. Congrats man, glad you decided to do it the result is 10 points

ps: so this is how a swimming pool in the 1st world looks like! it would def fit a kubrick movie

Happy to hear that!

The drum sound is mainly close mics I think so not much of the hall is picked up. The sound guy also added a reverb called MegaVerb to drums to make it sound ridicilously big like it were played in a swimming Pool…

The swimming pool is really nice yes, it’s only some years old. It was named after Alexander Dale Oen which is a famous Norwegian swimmer who died very young in his mid 20’s of a sudden heart failure.

Kubrick movies might be a reference for all I know, I remember the video director talked about Wes Anderson movies that he wanted to colour the light in reference to those movies. Originally we planned to have it more dark and had guy on projector light to make “light effects” on our white clothes. But it never got dark enough so the video director changed it to full blown “white teeth effect” on the cameras haha.

Sound and image are great! and he really capture the energy of the band.
Is a nice story too, the band was in stand by and got together for this, is wholesome

I came back for more and was not disappointed. You guys are rocking it! The production value is really great and the whole thing is a lot of fun. There are some banger songs. Again congrats! So glad you didn’t pass this one out

Side note, how crazy do you have to be to jump in a river in Norway?

I came back for more and was not disappointed. You guys are rocking it! The production value is really great and the whole thing is a lot of fun. There are some banger songs. Again congrats! So glad you didn’t pass this one out

Awesome, so cool you kept watching! Sometimes its hard to know if you are living totally in your own bubble as a band, and its nice to hear that it is interesting from outside as well…!

Side note, how crazy do you have to be to jump in a river in Norway?

Good question, the idea was rather impulsive and was a response to the fact that nobody were allowed to jump in the pool itself before it opens. And the guitarist is coming out from a 10 years long relationship that just ended so I guess it was a mix between built up manic energy after a difficult phase and maybe the wish to “live a little” perhaps haha.

Amazing !!! It’s great to see the author live !!! Very good idea !!! You guys are great ! Raised the mood ! We in Russia are slowly removing the quarantine and I hope we will also have fun in the pool ! Thank you for the video !!!

Thank you for your positive comment, glad it raised your mood!

Hope you can enjoy your pools soon as well!

Amazing music and stunning video! The guys who did the mix made some top notch work there too taming the reverb a miking everything properly. Congrats, Mojo! It really blew my mind.

Thank you! Super happy to hear that! We are actually in the process of using 4 of the drum tracks from the concert and recording everything else from scratch to be songs on our next album. It seems like the trick was miking everything close and some very aggressive gates on the kick and snare. Sounds quite 80’s or almost metal ish without any effects on them.

It’s quite interesting to not record with a click track I must say, everything is so much more “punk” and alive

totally loved the video itself and the idea of the concert and tracks is awesome. Good luck in future!

That band is extremely talented indeed! I am very curious now in listening to each of their songs…

So cool!
Enjoy it very much

I think that the pool lacks dolphins or sharks for epic and enchanting! But even so it looks very original!
This is definitely 10 out of 10!

Thank you guys! Really nice to read all the great feedback here

I think that the pool lacks dolphins or sharks for epic and enchanting!

Good idea! Next challenge will be underwater concert with shark costumes