By the way what happens when there is a refund? Does the IRS also refund its cut? Somehow, I doubt it… what then?

I don’t known. I think Envato should pay taxes and not the authors.

Sorry to read this @mcbenoit. This story is crazy and sad! Authors in countries without tax treaty with the US are having a hard time.

Maybe it does not going to IRS at the same moment…Perhaps there is a monthly or yearly payment.
Anyways, this is very sad thing for authors…Recently, i have 16 sales…Guess how much money i lost because USA buyers…I lost 22$ wich is 2 more standard tier licences on 19$ item cost…What happens at 30, 40, 60 sales? 40, 80, 120$ loss? Some things are too much…Unfair for authors with non-treaty countries and there is something that must be done that will at least make the things more acceptable for authors…Something like raising the commision…As im working to other marketplaces that sells in USA, i got no deduction at all.
Cheers

Yeah,that’s the thing i also don’t understand.Envato is the only market that is having these US Taxes,and i work on several other US based markets.

I think it’s just a matter of time - the ones that don’t require it now will do so in the future. In the microstock PHOTOGRAPHY world, which is a much more mature market, every single US site except one requires you to fill out a W-8BEN. It’s standard.

It is not the end of the word as I don’t sell $1000 per month… I think Envato should pay this taxes. It’s only my point of view and Envato is not my company…

By the way, can someone from staff explain how Envato justifies the negative earnings? And if you’re planning to do something to amend this case? @collis @scottwills @KingDog @natman, anybody?

This is nice very to nice of you to be allways here to help people but I think Envato has other things more important to do (I can understand that)
By the way others market places seems to be overflowing. Is there a link?

One of the biggest problem about taxes is that we are actualy paying that tax with unreal income.What does that mean?
Tax is applied on both shares : Envato and Author…If your commision is 50% (exclusive author) and you get 9.5$ from 19$ item…What happens next is that you pay the tax for BOTH shares, not your net income…Tax is not applied on 9.5$, it’s applied on total ammount of item minus author fee (wich i really dont know what is that and dont know what it means).
So you get taxed from 15$ and you get something like 5+ some cent…
I really like Envato market and enivoirment here but this is obviosly most unfair calculation ever…Just because Envato doesn’t accept to pay tax on their share so we are forced to pay that for them…
Sorry Envato but this argument is invincible and there is no excuse for this unfair calculations.
If we accept to give away 50% of our earnings, we should not accept to pay the tax of YOUR share…As our commision is growing by time, we will pay that tax untill we reach that 70%…And when that happens, you will pay 30% tax on your share and we will pay that 70%…I think this is fair method for everyone from non treaty countries.

but this is obviosly most unfair calculation ever…

And most pathetic of all is difference between those two numbers in Dashboard: 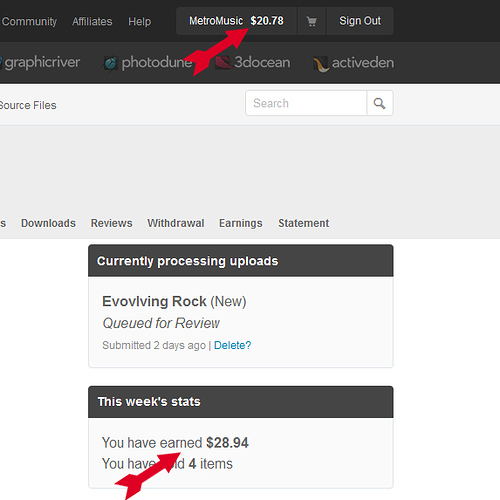 Should that say ‘evolving’ rather than ‘evovlving’?

Should that say ‘evolving’ rather than ‘evovlving’?

Damn it! what Am I gonna do now? May reviewer have will enough to change it

Probably best to wait until it’s live and then edit it asap.

hi my friend, well indeed it depends on what u are considering, i personally do not think that u lose money when u sell in america, but instead do not win as much as with other countries because of the additional fee, which is a totally different story … . After all nothing says that if u did not get this US sale, u would have another one, so that’s still a gain all the same, just not as big as the one u may have aspired to , but that’s a gain, not a loss … .As for me, i don’t mind paying the fees to IRS as this is basically meaning that i sold an item (despite, obvious, i wish none of us would have had to deal with this additional fee all the same, it stands to evidence)

Something like raising the commision…As im working to other marketplaces that sells in USA, i got no deduction at all.

well raising the solution for those who do not have access to self pricin might be a solution but on the other hand, whether this is this or self pricing, sometimes this is leo synonymous of selling with a higher price but a smaller volume and sometimes people do not get any better in the end …

I don’t really have nothing against tax and IRS or give away some bucks…I would rather give away from charity then for tax…But we cant do nothing…Only tax share method could be fair here, thats all.