There’s ensemble sordino and a sordino for each individual section as well: 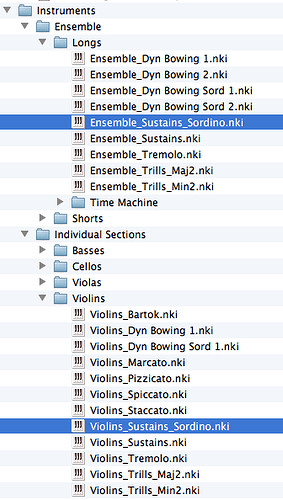 Found them. Thanks! Do you have much experience with East/West Composer Cloud? Ithink I’m going to give it a try.

Hello again; I won a demo competition in 2015 and as a prize I got one year free CC membership. After that year I didn’t hesitate to cancel my subscription. I don’t recommend the CC under any circumstances, for a large number of reasons.

Hello. Recently I bought Spitfire Albion One. It;s more expensive than you wrote but definitely worth the price. You get everything which you need to compose great orchestral music.

Regarding your questions as authors above said :

That’s all. I’m still learning and doing my best to understand orchestral music

But these points which I mentioned were my biggest mistakes. They are still sometimes

Hope It will be helpful for you

Hey. Thanks for the advice. I bought 8dio Adagietto the other day. That will keep me going for a while. I’ll check out spitfire too.

Thanks for telling about this great deal! I’m giving it a try, still downloading…

@BlueSkyAudio which are these reasons? could you be more specific?
thanks!

If I were buying an orchestral library over, I would just get Hollywood Orchestra. I think I’ve seen it on sale for $400 before, that’s pretty cheap for an orchestral library. I would recommend buying an entire library over picking and choosing, because it can be pretty hard to mix-and-match libraries and get them to sound good. If you want a more intimate sound, Spitfire Sable might be good, but it’s expensive as hell.

Question 2- How do you process your strings to get a full warm sound?
As others have stated, just buy a nice sounding library. Sometimes I will use CA-2 Software compressor to bring out the air. The better libraries (such as Spitfire) are mostly about balancing different microphone positions in order to get the sound you are after. However, you should know that doubling certain string sections (such as Volin I and II) with certain instruments (such as flute and clarinet) will fill-out the sound of the strings, and change their tonality. This is why knowing orchestration is so important.

Question 3- Can you suggest any good learning resources for orchestral mixing/recording?
Again, most of the better libraries will sound good without any extra mixing, as they are recorded and mixed by professionals. You’ll probably just spend a lot of time on midi automation, adjusting the velocity levels of certain notes, ect. As far as orchestral composition, I would recommend Rimsky-Karsakov’s Principles of Orchestration.

Thanks Adam. Great advice. I bought an 8dio library on sale the other day, so that will tide me over till I learn a bit more about orchestration and let me save up for a bigger/better library. I did wonder about mixing and matching libraries.

Would that be the diamond edition of hollywood orchestra?

Hello Mr Blue Sky. How are you? I must say, I’m really enjoying the sound of Adagietto! I’m working on a piece with piano and strings at the moment and I wondered if you could give me some advice? Say I’m doing a Violin track for example…is there a way that I can have sustained notes then spiccato notes on the same track? opposed to having the whole track sustained and having to create another track for the spiccato parts. At this stage, I’ve just made copies of the midi track for the piano and rearranged them a bit for the strings…so working mostly in the midi editor in reaper. I read the Adagietto manual but it didn’t mention key switching or anything. Thanks again mate. Hope all is good with you

You’re correct, 8dio have not setup Adagietto to include keyswitches, which is their common philosophy across all their libraries.

However, you can create a “bank” in Kontakt (very easy to do) - you then load different Adagietto instruments into slots in the bank, and then use “program change” midi data to switch between banks. In some ways this is easier than using keyswitches, because instead of scrolling through your midi piano roll to find your keyswitches somewhere down around C0 (!!) you can have your midi CC lane open and visible the whole time.

Pic 1: adding a new bank from the “Files” menu in Kontakt 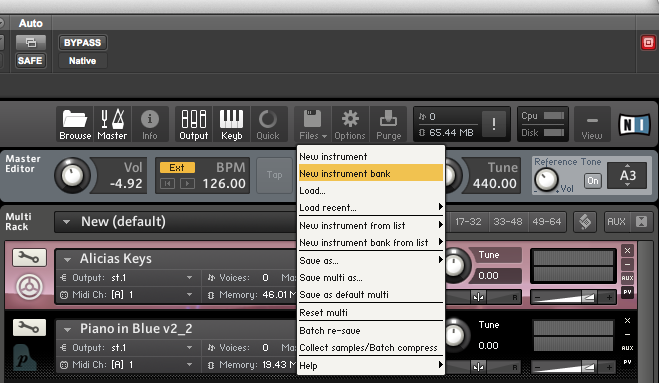 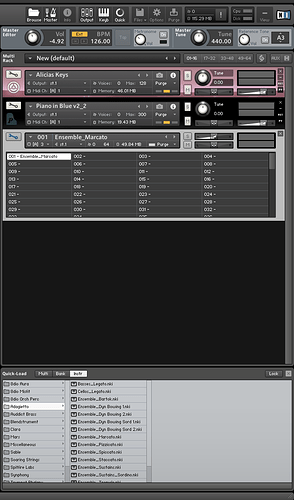 Here in Pro Tools I have opened up the “Program Change” midi lane where I control which slot in the Bank I want to play. This operates the same as keyswitching.

Thank you so much for this!

I’m new to Kontakt as well, so this helps a lot! If you are ever in Edinburgh, please let my buy you a pint

It’s great to be learning all this midi stuff. I really appreciate this. Just wish I could return the favour. Thank you!!!

Hello again Blue Sky. I hope you are doing well. Thanks again for your help with kontakt. I am able to change program with Adagietto now. However, I wondered if you can help me with one more thing? In a piece that I’m working on, I switched from Sticatto to Sustain and back, but the Sustained notes were too quiet. I managed to make them louder by clicking on the Sustain box in the instrument bank and increasing the volume there. Is this the best way to do it? Also, when I create an instument bank, I can’t seem to view the instrument interface anymore for each articulation. I think basically what I’m asking is what is the best way to edit the articulations once they are in the instrument bank?

Gavin, unfortunately this is a weak point in Kontakt, but easy to get around. Most of the time you rarely need to access the controls on a KTK sample library, and adagietto instruments feature very few controls anyway.

So in your bank you just need to click on the instrument you need to adjust, then click on the wrench in the upper left corner, and finally click on `script editor’ on the right. This will bring up an incomplete version of the GUI, but it will contain the controls you need, however without their normal appearance. Then you adjust as you would normally. 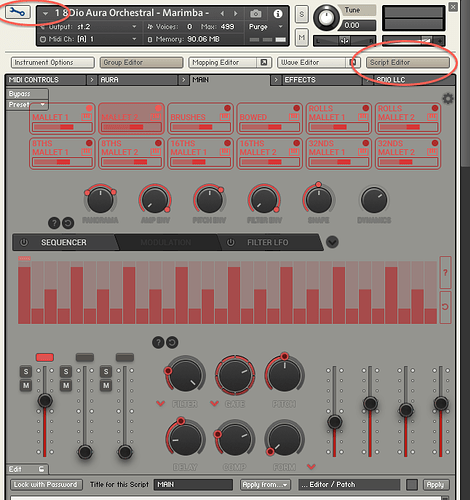 Thanks Blue Sky! Sorry I had to bother you about this again but I couldn’t find any info on this anywhere. I appreciate all your help.

Hi Gavin,
may I recommend to try out the Garritan Personal Orchestra, really good sounds and reasonable price and very easy to work with.
Check out a sample on string sound:

and some piano (after a couple of minutes intro)

and piano and flute:

This topic has been a very interesting read, thanks guys

I’ve started out with the Miroslav library, and it served me well. It has endless possibilities but in the end almost always needs EQing… Nowerdays I’ve upgraded to EW Orchestra, and the sound is certainly cleaner but however needs much more tweaking before you are ready to go (at least in comparison). Another problem can be that soundsonline products come with iLok security measurements, which can destroy a couple of days of your time if you are new to it.

Thanks for the suggestion. I will check it out. The only orchestral stuff I have at the moment is 8dio Adagietto which sounds amazing, and the stuff that comes with native instruments Komplete. I really need a computer upgrade to get more serious with the orchestral stuff. 8gb RAM and an i3 processor just isn’t enough without having to freeze tracks all the time. Thanks for the tracks, they sound great!