Now wordpress themes are in elements, I feel themeforest wordpress authors will loose more sales due to this. The best WordPress themes and easy to use WordPress plugins are just a click away. Browse everything WordPress on Envato Elements.

Now, it seems, unfortunately, everyone used to the continuous, never-ending Elements Banner on top, right?

Not only that, WordPress added recently as a new category to Elements, and Price tag has gone from $29 to $19 ($29 was already cheap more than enough)

Meanwhile, you’re using surveys to measure “community health” (where you are the ones who choose the “questions” to be asked which is also another problem) and also offering promotions for authors’ items which will never work as intended because of the shadow of a service that offers almost everything for just $19 (“it’s just momentarily”? - it’s not the point). The same “Elements banner” also confuses customers on authors’ own items’ pages, because that banner is everywhere; on the main page + authors’ items’ pages!

Now, friends, don’t you really think that there must be a FAIR way to promote Elements? 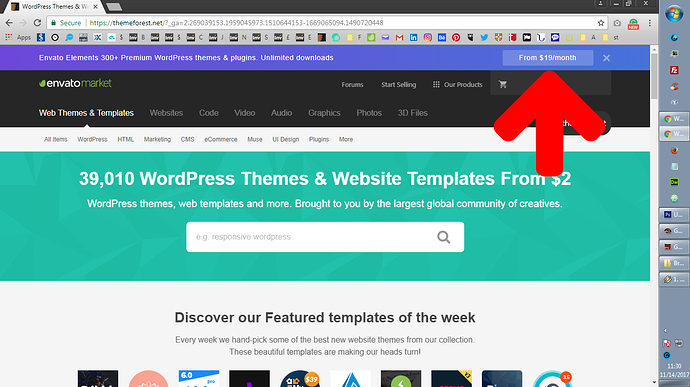 @Bedros have you checked your analytics?
Mine is skyrocketing today, compared with past Tuesdays.

There are a lot of pageviews == potential customers.
WP on Elements is only for customers spending 228$ (yearly). Then isn’t exactly for everyone.

Is too soon to speak, but as is now, is an advantage for both worlds since Envato is investing a lot in advertising

Your’s are sky rocketing because you have plugins on Elements. ( by the way is it profitable ? )

Sales are bad for me this week for example, and traffic is normal

Pay attention to what I wrote

I mentioned Envato Analytics, sincerely I still don’t have checked my website’s analytics. Then is totally indipendent from Elements.

This because Elements earnings report will be next month (yeah, you properly understood: one month to know if it’s profitable).

A post was merged into an existing topic: Introducing WordPress and Annual Subscriptions on Envato Elements

I am sure there will be few wp authors who are on top list in themeforest, others will be vanished.

I have a bad feeling for wordpress, it takes a lot to publish a theme - now only thing I can say is RIP to wordpress theme community - sales will go down like crazy - who will pay for 1 theme when he can get 100s of theme in html’s price? only envato will be benefited as they are competing with small theme clubs outside Themeforest, in the end wordpress themes will be unprofitable, what can be done feeling hopeless

Did you read this bit? Could be different for Wordpress, but to early to say.

At this point we’ve also had some web-related content available on Elements for a long enough time to have a better understanding of the potential impact of Elements on Market sales of WordPress items. Perhaps the most relevant is CMS templates, as they are also code-based items that have similar requirements around updates, feature enhancements and ongoing support.

For CMS templates currently on Elements, the data shows that the sales for these items on Market have remained consistently on trend, with little to no cannibalization of Market sales. Additionally, when you add in their earnings from Elements, authors of these items are generally seeing incremental earnings growth of +10%.

We believe that when we add WordPress items to Elements we’ll see similar results for theme authors. The framework for WordPress we’ve developed also means it’s more likely for Elements to function as a traffic source for the ‘full service’ versions of items on ThemeForest and CodeCanyon.

well think from a customer’s perspective - wp theme is a very competitive market and now we have more competition to fight it was ADP now subscription and it will not give a fair competition for everyone, maximum sales is taken by top popular items, only time will tell

Well, it’s probably best to go on historical data rather than to make assumptions about the way customers are going to think. I can understand why youve arrived at that conclusion, but everyone thought it would be the end of GraphicRiver when Elements was announced, for the same reasons, but that’s not been the case… unless Envato are completely making up those stats, but I’m not sure what they would.

We were considering to try this market as an alternative to our custom web development projects. We thought it will create a so called passive income and will give us a possibility to concentrate on coding and own creation ideas instead of building project by project websites… We even launched one small test plugin here

(Please do not encourage competitive marketplaces. Thanks!)

Good luck!
So pity years ago Envato was a nice place…

Sales are dead. Thanks envato for WordPress on Elements !!!

Sadly mostly of us dont even have a chance to support it.

I think sales are not dead, they have increase their marketing/promotion to improve it.

sales may improve only for top sellers, average authors sales are completely dead, if not yet, will soon.

I am wondering is there any Themeforest authors who would like to share how they were affected by Elements introducing themes and websites.

How your sales and earnings were affected?

Some responses from people who are on Elements, as well as those who aren’t, would be nice!

Our sales have stopped after the WordPress products launch on Envato Elements (about 2 weeks ago or so).

I hope our comment won’t be deleted but the truth is there’s no point for us to keep producing new products because of ADP and Envato Elements.

An you show the sales graph? Simply without numbers if you want to avoid it. Curious how elekents affected the graph.