Why Hard Rejected ? - Point Out The List Of Mistakes. 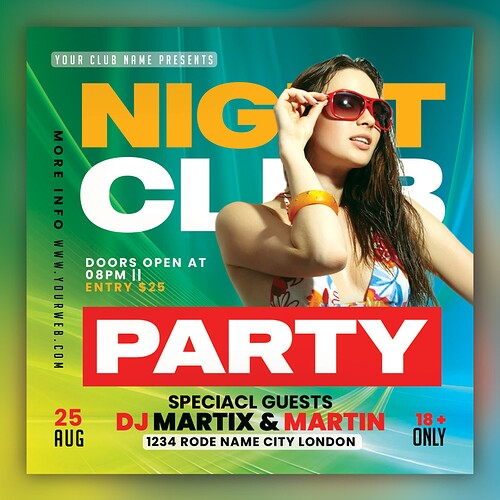 hi at this stage the flyer looks much more like a series of elements pasted right next to each other rather than an actual composition indeed … the thing is that there seems to almost be no interaction whatsoever between the different elements. Look the central bullet is pasted in front of the model, no shadowing results from this placement … the model is pasted over a background and the model generates no shadowing. What I try to explain is that for elements to be more than just elements pasted right next to each other u have to have a series of things being done to show a “global coherence” and that all items are part of a whole … In addition, as Ki Themes mentioned, there is a discrepancy between the theme and the text that looks strange. The background keeps being rather simple and looks disconnected from the rest … there should be sort of a dodging at least so that the model looks like belonging to the same scene as the background. The Club name is also completely put on the sideway, which not super coherent to say the least as regard to priorities of potential buyers, who will be willing to have their place advertised, not only their punctual event. The footer is globally lacking of breathing, too. There is , as well , something that looks not logical when it comes the background and model orientation , when it comes to the lighting. The light is coming fro the right though the green color background part looks clearer than the blue one