Who would save Audiojungle?

I’m not sure why Envato is letting this 5$ items continue,
It’s destroying the market,There’s a lot of good musicians here that are working hard and some of them supports families. I refuse to believe Envato doesn’t care…
PLEASE TAKE ACTION!! 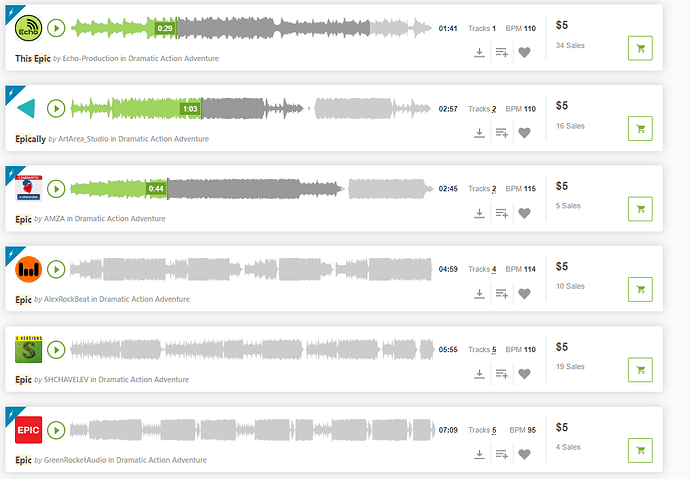 What’s more scary is they seem to be promoting the lower priced items to a certain extent now too with the change in layout.

they choose the track, unless it

Where are you getting this info?

From video makers in real life, on YouTube, and even here on forums. If someone can’t afford to pay say $30 for a track, wouldn’t it be much more easy to download something for free instead, there are tons of free pre-cleared music on the net.

I was asking about the numbers and statistics…

You can set any price on the search page filter.

The situation is equally dire for “Christmas” tracks. New tracks enter the page toward the bottom, and normally priced tracks “appear” wildly overpriced, only to drop to page 2 within hours. Authors who participate in this madness are doing irreparable damage to the market. 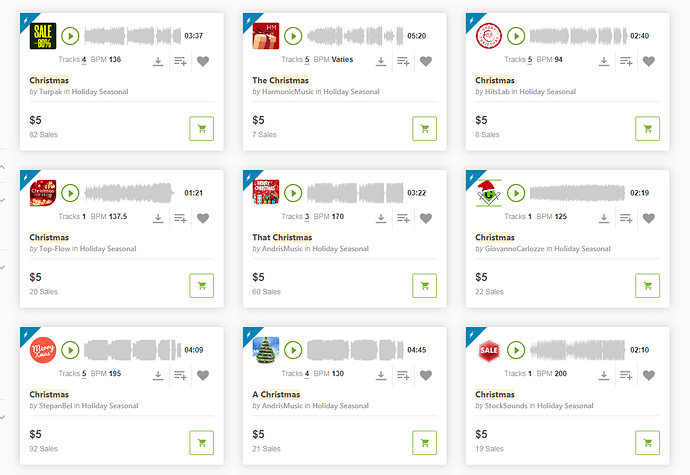 That’s how something like Christmas cards or, I don’t know, decoration are getting price low in this time of year. That’s the mass market, I believe even some hand crafted presents are on sale too, beause it’s better to get 10% of something than 100% of nothing. For me it’s better not to participate neither in dumping madness nor the overcrowded mass demand market. I can’t image getting 66 cents for a sold track.

You can clearly see by the new category pages and price filters that Envato HQ warmly welcomes price dumping. They could easily fix this madness if they wanted to. They just don’t want to. Price dumping seems to be their religion of choice. Most likely they are trying to attract more super low budget customers that potentially can be lured into Elements.

This is the Holiday/Seasonal price filter I am seeing: (might be a test that not everyone sees)

“What is really hurting this marketplace is displaying the number of sales, and ranking items basing on that number. If only we could see the real per track income that would change our perception on what is really going on.”

I totally agree. On other stocks, the buyer does not know information about the sale of the item and this does not affect his choice.

ah ah and if the low price was not enough, they still use stupid track names… They are all called “Epic”?
I am wondering, how can this be taken seriously?
You land on a page with ultra low prices, the same track name everywhere…

It’s very sad that the pricing tiers are so small, and that $11 is somehow the indicator of “expensive.”

Yes absolutely. To have a little more representative price spectrum would just make a lot more sense. For example an asian site which aims for the same kind of low budget customers as AJ has $5-$20 — $20-$35 — $35+

I think pre made price filters is a really good idea to reduce some of the extreme price dumping, but then $9-$11 can’t be considered “middle priced”…

It seems like it’s orchestrated by people who have no understanding of music licensing at all. Which might very well be true.

What the ….? I haven’t even seen this new (?) design yet… How come that every update makes things so much worse?

Is there a union I don’t know of between sellers and the owners of this marketplace to wreck the whole market as fast as possible? Don’t get me wrong, I don’t really blame those guys “selling” (no amount of quotation marks in the world would be enough for this) their stuff for pennies - in the end it’s a desperate try to conquer the situation they find themselves in. But, it in fact IS on of the major aspects ruining the market you want to be a part of and profit from. You want attention? Give your stuff away for free - you’re basically already doing it. And no, I’m not joking, this actually is a real strategy that can bring tons of value (and real money) in the long run, while ruining a market clearly is not. What’s the next step? Paying customers to license your music and therefore pay-to-play like many of the sync licensing scams out there?

Envato on the other hand almost forces sellers to offer their work for next to nothing, if they want to be seen. Which is the ONLY point of this marketplace, otherwise there would be no point at all to sell your work here. 5, 9 and 11 bucks price sorting options? Top page promotion (besides (H)El(l)ements, of course…) for “New under 10”, “Hot under 10” etc.? Really?

There simply is almost NO reason for a buyer to purchase, say, a christmas track for more than $5, if the majority of tracks that are visible (!) cost $5. The proof is in the pudding - most of the top selling christmas track cost $5.
Yes, there might be the slim chance that someone falls in love with YOUR track for a very personal reason.
But’s let’s be honest with ourselves - as long as a track passes a certain quality threshold, there are at leat a dozen other tracks similar enough here to do the job.
And while in the real world (almost everywhere outside of Envato) prices in fact matter way less to customers than many sellers here think, the authors here and Envato educate (or even better, condition) the clients to buy cheap.
If they don’t realize what this does to a market in the long run, they really should educate themselves, since their knowledge of economics and/or pure logic clearly needs improvement.

If the lowest price for an item you need would be, say, $50, then you (have to) pay that price if you want it. Would you buy an item for $50 if you can have basically the same one, of the same quality, for next to nothing? No. (Let aside the neglectable number of customers in a purely moral “I support fair trade” category.)

I’m well aware uttering all this will change nothing. I have to say it anyway and support the opinions of @EightBallAudio, @CommercialMusic, @Mojosoundtrack and others.

I just calculated the average price of the first page of the New Best Sellers of the last month, ranging from $5-$39: https://audiojungle.net/category/music?date=this-month&sort=sales&utf8=✓&view=list#content

The average price is $10,9. Maybe this is the reference for Envato’s new price filtering?

The average number of sales for “at least $5” is 33, for “at least $29” is 6, witch is 5.5 times less. And what about income? I’m not a pro in statistics or math, for the sake of simplicity let’s presume all of those sales were stantard licenses and deduct $4 from each one, and say every sale was split 50/50 between author and Envato. So I found that in first case Envato’s (and author’s) profit was $3083, in the second case - $15978.8, wich is around 5.18 times more. I’m almost sure I’ve messed something up in my calculations and made too vague assumptions, but to me it’s pretty clear that everyone is loosing money with this kind of sorting system. With the proper, income-based system pretty much every of this $5 track would end up somewhere on the page 15. What could this mean? I guess Envato’s just tries to bring more traffic from low-budget buyers, and it can afford to pay for it. Why this happens? Pretty sure that just to enlarge the Subscription userbase and generate more recurring income in the future. More and more service providers and goods suppliers are going towards subscription model, it this days you can “subscribe” to great number of things, and not only digital. So this segment of music business will migrate to subsciption model sooner or later. Just my thoughts though

I hate self-exposing, but lately, I started posting on “Your Last Sold Track” thread more often, for one and only reason. To trigger the $5 authors and to prove that we can sell at $39, $49 even at $59… Ι want to personally thank @MojoSoundtrack and every author that keeps the standards high and creates unique and quality music.
What happens on this market lately is very sad.
Who would save Audiojungle? We can save Audiojungle.

Thank you @artsygoat and likewise!

It’s no doubt that we authors collectively have a responsibility in this madness, but I am afraid there are limitations to what we can do as long as the current system rewards sales numbers only + Envato is showcasing and giving better visibility to very cheap tracks.

I doubt the Envato headquarter will wake up and care about price dumping, I don’t have the stats about this, but I would not be surprised if an average $5 tracks earns way more then an average Elements track download. It’s a grim new reality we are entering that’s for sure.

Fortunately people are willing to pay good money for something that does not sound like everything else. Not sure if AJ will ever start to acknowledge and care about this, but I am sure other sites will.

@MojoSoundtrack Until all authors try, it will not end. This is a matter of time, which ultimately will be resolved in the direction of profit, not dumping, I think so (at least this should correspond to common sense).

To make any conclusions, should compare the profit before and after. And then this question will disappear by itself.

At least I doubt that someone wants to sit with an empty purse for a long time.