I tried to copy some very successful sport rock tracks in terms of energy, style, simplicity, instruments, mixing, and mastering in izotope - including this one:

But my track was hard rejected and I have no idea why. Please can someone tell me what was so bad AudioJungle didn’t think it could be corrected.

Personally I think your version is too close to the original you admit you try to copy.
I understand you want to get inspiration and need something to guide you into the right direction to get an approval, but trying to copy an existing track is not the way to go.

The idea is that you come up with an original track based on the research you have done.

Furthermore I think there are some dissonances in your arrangement.

Thanks. But they didn’t reject me for being too similar to existing items - which is a category of rejection they have available. It was a quality rejection.

I totally understand you. I guess that to make something similar, but original and another, is the one of popular strategies on AudioJungle. But I got about 3 hard-rejects in January, and all for the reason of “Quality standards”. I couldn’t understand what was wrong with my tracks.

However there’s another one strategy. It’s creating original track, which can bring some new view of some genre or style. For example, I tried to create a hybrid of ambient music and ethnic Chinese music, because there are not many such tracks. But it was rejected

. They told me that it didn’t meet quality standards. For the first time, you go to the FAQs and read what the standards are. But when you receive the same respond, you become perplexed and have no idea what’s wrong: is it connected with mastering, instruments’ choice or the main idea? Music creation is not some mechanical work which can meet some basic problems. It contains creative ideas and ways to make something interesting and good. There’re many components and elements of the whole process which can be done bad, and, well, I think moderators must indicate the exact reason why your track was rejected (instead of sending it to forums for public opinion): like “your mastering needs improvement” or “we think you should remove the instrument which shows up on 0:35 or make it better” and something like that. Not just general “It doesn’t meet quality standards”, after which you go to some Asian wiseman in Himalayas in order to ask what’s wrong with you and your track.

Seems that, among professional authors, there’re also some green students from the medical school who know nothing about music, except Ed Sheeran (just a joke

Reviewers actually give feedback like that when it comes to soft rejections. I had that happen a couple of times. In that case you pass the quality phase and you get a suggestion to make a (small) change.

In my view, the quality check is a broad check that includes many things: composition, arrangement, mix etc. etc. It can be frustrating to find out how to improve but there is a way and that is to just keep trying and learn.
Also AJ is a platform with certain requirements. Something that is rejected here might work very well somewhere else or in a different situation.
If reviewers would have to give feedback on every hard rejection it would probably lead to a flood of support tickets consisting of endless back-and-forth.

I imagine the queue length would be many times longer if reviewers were to write up detailed reasons for every hard rejection so I’m glad they do not. Luckily, we have very generous authors on the forum who are willing to give advice.

Thanks everyone, but really I’m just looking for feedback on the problems with this track, I know how AudioJungle works.

Also, I don’t agree that your version is to close too the other track.

Yes, I agree with you. They will go crazy, if they pay many attention on each track. I also met soft rejection. But, in my opinion, it’d been too much hard-rejections for the whole 2022. And it’s not only my problem: many authors (from newbies to elite) met the same problem.

I think that hard-reject is about very bad and not commercial track, which is composed by some garage-music maker. But when your music sounds, objectively, good and could be used in some media-project, and it’s hard-rejected, this confuses me. Yes, I’m not cool composer like Steve Jablonsky or Howard Shore, but I have some experience, I work a lot and I know typical mistakes on AudioJungle.

And, like in any market, you want to bring some new ideas which could change the view on popular items: corporate, meditation, cinematic etc. So, you try to do that, because logically Envato should be interested in this for the perspectives of much bigger profit. And when you send your track to moderation, they reject it.

After that you see how new tracks appear and they have nothing special, comparing with older ones and popular ones. I even do not talk about strange and awful tracks which just confuse you, and you have no idea how did they get on AJ. Admit that AudioJungle has too much typical corporate tracks, for example. As an author, you want to upgrade the style by adding new instruments or changing the idea (never mind), but Envato rejects it. Seems like they don’t want that.

However, there’s hard economical situation in world, and Envato hardly will let you make experiments of upgrading the industry. That’s kinda sad

Thank you so much, Arjuna!

Hello everyone!!
I’ll tell You my opinion. Your track is similar in the musical part (style, arrangement, etc.), You succeeded. But on the technical part, Your track is inferior (and that’s why item was reject). The sound of Your track is muddy, the low frequencies are very wide in the stereo panorama. I allowed myself to slightly correct the sound of the track. You will see what and how I made corrections on the video. Here is the link to the result Sport Rock_EDIT . Sorry for my English.
Good luck!!!

I noticed you made the mids and highs more mono. Shouldn’t only the lows be mono? 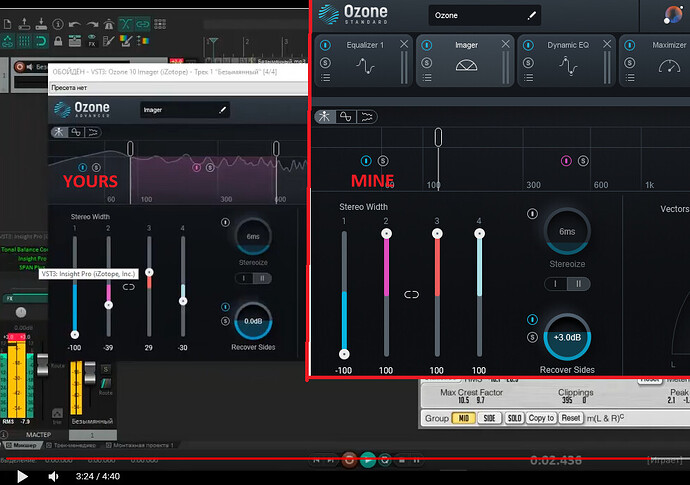 I thought if my guitars and high drums were very stereo everything sounds more epic. So I always do this on high instruments:

What were you doing with the mid/side please? I don’t understand the difference in sound.

I have only Native Instruments Komplete (so Ozone Standard, not Ozone Advanced and no Tonal Balance Control) so I need to find a free mid/side plugin somewhere.

And with the dynamic eq? I could try to copy what you are doing with the free TDR Nova.

Sorry to throw another point out there but one thing the reviewer might have thought is that the instruments don’t sound real enough. This may be partly due to the samples but also the parts themselves. In the more “notey” guitar sections this becomes more apparent. Real instruments would be ideal, but if that’s not possible then I would work on writing and programming the parts to sound more realistic. Perhaps making the riffs a little simpler and more direct would also help. Good luck!

Hello RichardJECooke!!!
I will try to answer your questions as far as I have enough knowledge of English.

In case no one else has mentioned, the guitar sounds very fake, I think that’s the biggest quality problem. You can get away with fake guitar sometimes, but to me this doesn’t work on this track. On the track that you copied, you can still tell it’s fake guitar but it’s not as bad.

Ahh, that might be it, thanks. I thought Electric Mint sounded pretty good in the NI demos. Maybe I’m not using it well. Or maybe I should just stick with my piano and orchestral instruments, which always get accepted.

Fake guitar generally works best for rhythm, power chords and such. Especially when you have some higher notes I think it sounds worse. Could be you could simplify it and make it better.

Odd meter grooves and polyrhythms combined with a barely decent composition. Is not the sound. Unless is preposterous bad, a decent sound with a good musical composition is usually accepted.

It is true that you should probably consider all aspects of a track when it’s rejected. They choose one of two or three reasons for the rejection message but it could be more than just production quality or just commercial viability.