So just to be clear: flagging comment is NOT enough, right? The report should be submitted via helpdesk?

Reporting a spammer, like an actual, obvious spammer is enough, but in the situation where the user is pushing GLWS’s to the point of spamming, then yes, they need to be reported via the helpdesk.

The guys that handle item comments only investigate obvious spam, you can imagine seeing a GLWS message, after the tons of them that get reported don’t automatically trigger someone to further investigate.

So if you want to report spam, which is “subliminally” hidden by a GLWS message, then yes, I’d say report it to support via the helpedesk to be sure!

Better give him a week long temporary suspension from selling his products citing the reason, He will never do it in his life

Jesus f…g Christ! He definitely uses automated script to do that, and it looks script isn’t polished to perfection yet. I would suggest you submitting this to helpdesk (if not yet) and including this screenshot along with link to this thread, so support can see other people complaining about the same person who does lot of spam.

It would be cool if support staff forces him to flag every single his own comment on Envato market in order to avoid suspension. He would need to write a way better script than he uses now, or do it manually by hand…

Envato should give you special badge: “Survived after spammer attack” 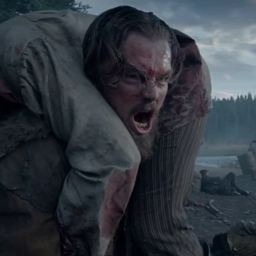 There´s another issue about self-promotion. But nobody never says anything at all. Don´t forget when some authors post here about goals, achievements, etc, as videohive authors and sales and everybody says “Congrats”, etc, but these “innocents” posts have always a link to their portfolios, and this my friends is called self-promotion too.

Well, I completely ignore such posts, but yes, I think celebration-stuff should be removed completely from forums because it adds exactly 0 value to community and is abused by less reputable authors who will do anything to get an extra sale.

Wow, that’s pushing it. I definitely can’t ban his forum account for that or do anything on the forums and this is the perfect example where you should get in touch with Envato Help and Support. They’ll take care of it for you mate

Hello, I watch this discussion and I understand clearly what shall be done with spammer. Envato Support link in several posts.

i really never cared at that time, I just cleared it one click, after seeing this thread, i remember those, One of his goals were achieved, i clicked and seen his profile, anyway it never hurts me

To be precise it was 43 Comments, 25 days ago (Within approximately 15 mins)

@secondfalseiteration : i really love collecting badges, If envato is kind enough they should give me the one

Hello GoForMotion,
one of your first posts (or maybe first one) in forum was “10 items approved. Cool!”. You were lucky and wanted to share it a time ago. I would have congratulated as well… But has something changed from that time?

Do you really don’t see the difference?
Celebration thread are inside the Forum. This guy spams directly on items page. 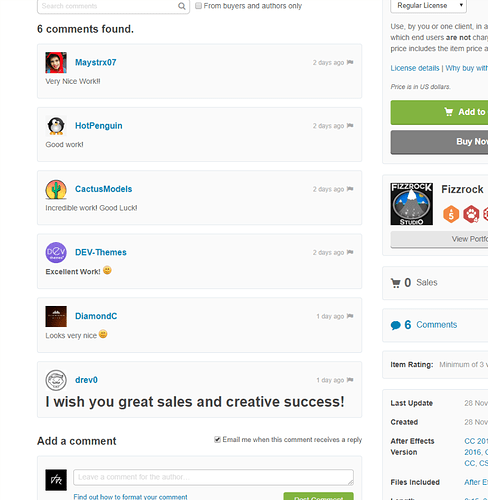 i really never cared at that time, I just cleared it one click, after seeing this thread, i remember those, One of his goals were achieved, i clicked and seen his profile, anyway it never hurts me

When people don’t care, things starting to getting worse.

Yes mate, the change was I didn´t know (at that time) that selfpromotion is not allowed, as a matter of fact my post was in 2016, then I was just starting here so I didn´t know some things that I´ve learned day by day. Didn´t you consider working for FBI or CIA?
Cheers!

I perfectly see the difference @secondfalseiteration. I was just adding another form of “not allowed self promotion” to the conversation (wich I did in my first post back in 2016 when I started here because I didn´t know that), but anyway nobody takes this I mentioned into consideration, and there are lots of these kind of “innocent” posts. I totally understand what your saying, and I respect that, but I never realized about this spammer because never caused any problem to me. I see you feel affected by this author, so it´s your right to make a ticket to Envato Support.

Lol, I know all those accounts =)

Kinda similar picture I see under my comments section =)

And it’s not from my item. I just randomly chosen one.

Yes, remember that, too. Only time I flagged his comments.

But of course I recognized his behaviour before: 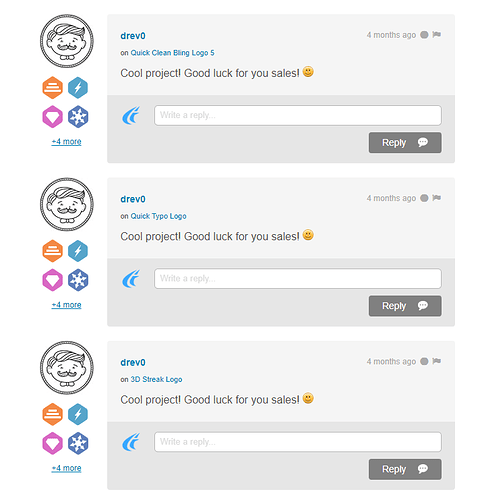 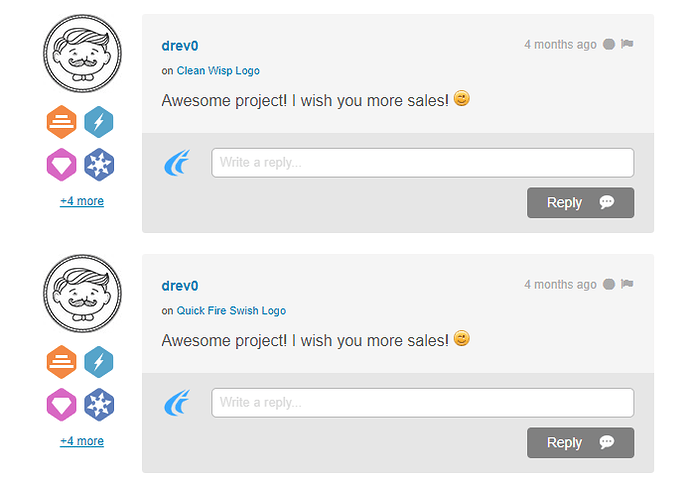 I will open a support ticket to basically support @secondfalseiteration’s cause. (man your old name was way easier to write Dog

My ticket ID is 1317185. People who want to report this spammer as well can mention this ID to support the claim, if they want to. Makes it easier to report.

Now it’s time to monitor his profile and check how long it will take before he stops commenting completely. Ig that happens, we will know Envato really doesn’t tolerate spamming.