What is going to stop Envato from forcing us to pay more for the next release or for existing items? What is preventing them from increasing the price for all users? I signed up early on (beta) with the expectation (since I was told by support that it would be) that WordPress was coming. There was no mention of additional cost or upgrading to a different plan. How can this be resolved? I have been around since the beginning and I understand that new users may be subject to this but those of us who have been in from the beginning should not be subject to this change.

I think another unfair issue is the fact they have given us just 2 weeks to upgrade our accounts at the $19 per month over the year. After this it reverts to the full price for the year.

The people who are on the low pricing (because they signed up from the start and have never missed a payment) and were promised this price would never go up should have the offer (if they wish to upgrade and not forced) open to them indefinitely.

Thanks for your feedback piperhowie.

I understand your frustration and thank you for sharing your thoughts.

Just wanted point out that the discounted annual subscription price to Envato Elements, it will be available for the next 2 weeks rather than 1.

Sorry, but this look like a weak excuse to force a new subscription on us. there are other ways to ensure an annual payment and community loyalty without charging all of it in a single payment and still protect the earnings of the author community.
the message you sent us is that you protect the developers and don’t care for your subscribers. We are part of the community too, but apparently not one that matters.
Sad that it came to this point.

Envato Elements: Design without limits
(except you can’t pay annually)

To give you additional insight. Elements was never intended for WordPress nor HTML or CMS, it was conceived as a subscription model for graphics, which works well, no support, low upkeep etc.

Then pushing all of this makes tons of issues, for clients as well for authors. Keep in mind Envato devours 50% other 50 is in an interesting and creative way shared among authors.

A sweet deal for Envato not so much for authors, and they have a fantastic advertising channel… picking up clients from other Envato markets. Interesting is that vice-versa ain’t working

Just my humble 50c, from authors perspective which are not on elements

Thank you! my exact question another thing is how we’ll update the themes without a code? do we download again and replace the current one?

Although I agree to the point of some early adopters like me (I understand both sides), Authors need their revenue, that is why they signed for it, Mostly I have used elements for the graphic parts of it I have downloaded some html, cms, but only to check the code and learn more, the addition of wordpress and plugins it’s a welcomed one, thank you! the annual subscription doesn’t bother me that much, just the time to do it does, the whole get in now! or else, seems a bit much, may I suggest that Envato simply lets you upgrade to annual and in the next billing they take the $228 owed to the subscription? I understand that for those who earn in dollars or on a currency higher than the dollar it’s not much and I agree with them I used to get paid in dollars, but maybe like many and specifically in my case I don’t get paid in dollars anymore, I have to buy them and fund my account for that purpose, it comes directly from my pocket and later when I get paid from my client, it’s basically deducted in my books as an operations expense.

The whole registration to upgrade issue is a good one and a serious one in the future and it should be looked into it, even though I’m tempted to upgrade to annual, I can’t do it right now under those circumstances, in the past, I have bought themes later to be dropped by the authors and I had to buy new ones or had bought themes that are not what they advertised, like too complicated for a client to handle by themselves, I could give direct examples and some of them are authors that signed their themes to be on Elements, but that is a different matter.

Those are my thoughts about this, Thank you very much.

I understand your point and frustration, but if we look and the files in terms of price on envato market some of the most expensive ones are themes, they require more work and dedication, so even though I understand that they want to take on an annual subscription (which I don’t mind) I would rather look for the $228 per year than run around every month to buy dollars to fund my account and pay the $19 every month, maybe that is not your problem but it’s mine, every month I buy something on envato market so beside the funding i do to envato credit, I leave the $19 for elements.
What I understand is that it should be optional for early adopters and for those who are not, could be annual.

I mean, I really don’t think that those who really like elements will leave after downloading EVERYTHING on elements, every week they have something else, something new, something that might be interesting to use, when elements started I showed it to a lot of people and some where reluctant to join, now after seeing how much has grown, they don’t want to pay the $29, because it’s still too much for them, but in reality I see the value in it, they don’t I also don’t think that making it annual will cover the loses on the part of the authors, think about it, some themes in themeforest are around $40 in elements the same theme you will get it for $19/m (it’s a bummer that you have to buy the theme in temeforest if you need support, some of them are very bad at it), but on elegantthemes, they charge $87 for basically 87 themes and 3 plugins PER YEAR!

Let’s be fair, there are people that will download everything and then quit, but to suggest that early adopters would do that, maybe was a little harsh. the guys from envato maybe presented the whole idea a little too forceful?
But it’s not a bad Idea, just too hard on some early adopters (like me) to make a jump like that, but what can I do? if i can’t, I won’t.

We made the decision to introduce WordPress under the annual plan only to protect our author community earnings. A huge amount of time and dedication goes into creating and maintaining a WordPress theme. We wanted to make sure authors were properly rewarded for their efforts and mitigate the risk of some people subscribing purely to download the entire library before cancelling their subscription.

I’d definitely be interested in seeing a response to this. Why does Wordpress get this treatment over the other templates. Do they not require just as much effort and updates?

Even though I’m more of a wordpress guy, I understand and validate your point, just don’t get too literal, since SOME wp themes are more expensive than other cms, they made that point but every theme requires care and time as much as any other.

Hi Guys,
So glad that you have introduced Wordpress themes and plugins to your offering.
I signed up for Envato in July/Aug 16 and so have an old rate introductory of $19USD. Whilst I am not thrilled with the annual subscription, I kind of understand your point for locking people into a yearly subscription.
On the other hand, I think it’s absolute rubbish that I won’t maintain my monthly rate if I choose to downgrade from annual to monthly in the future. I’ve recommended so many people get onto Envato Elements in the past 12 months, to me it makes no sense that you are not further rewarding your early takers. Food for thought.

There have been a couple of good questions raised here. For those waiting, know that we’re working on getting you some answers which you can expect in the next day or so.

Thank you very much for the price.

I think I made a good deal with You and the rules will not change,
but you insert … wordpress (blow down the waist - in the back and in the heart simultaneously) , my heart is bleeding (like my wallet: P) - maybe instead of ordering an annual subscription you will add a dollar or two: | to my current subscription Or some limits? 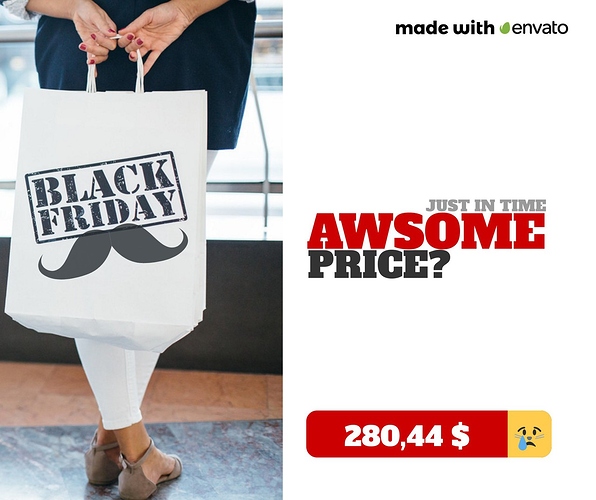 Thank you. I hope this conversation ends in a good solution for all involved: early subscribers, authors and Envato.

I’ll wait with a lot expectations!

I didn’t even realize this before. I can’t believe that if you downgrade to monthly they’d remove the discounted rate… That provides even less incentive for me is that to upgrade to annual.