Standards increase all the time, 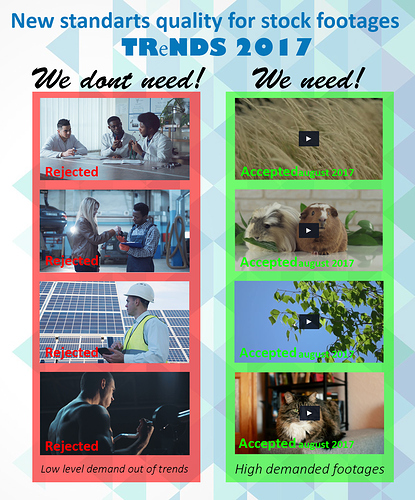 I am serious man! I agree that all we need to improove every day our skills! BUT I DONT HAVE MONEY TO BUY CAMERA WHICH DOESNT NOISY. WHY? BECAUSE I HAVE 1200 footages from 4500 which i did last three years. I AM HARDWORKER!!! EVERY DAY I WORK TO IMPROOVE MYSELF BUT SOMEONE tell me Unfortunately its bad!
As you see i am not most worst author. LET COOPERATE AND SUPPORT EACH OTHER.
We need urgently change this situation.

I don’t think you’ll find accurate rules on what to shoot on any stock site.

Here is the link on P5 blog: https://blog.■■■■.com/15799-gathering-intelligence-stay-top-creative-trends/?utm_source=sailthru&utm_medium=email&utm_campaign=artistinsights%2B2017%2B08

Only Elite authors who make big money for authors… it’s always only been Elite authors who bring big money for authors. I mean, not exclusively, but on an author by author basis, elites usually bring in a lot more money. Nothing is going to change that. And it would stand to reason that higher quality authors creating higher quality items that result in more sales, are going to make elite quicker and carry on generating high sales and high quality items. That’s the same here and on other sites, whether they have an Elite program or not.

Elite weren’t elite earlier. You have to give the chance to grow at that who hard works today to become elite. It is difficult? It contradicts ambitions?

I would like to hear you if you were on the place of the ordinary author but not the member of Envato team.

Yeah, I pretty much have 100% acceptance rate. It’s a bit different for motion graphics though. Noise, grain, artefacts and lighting… there’s not really any excuses when it comes to animation.

And motion graphics are usually a bit more commercially viable than stock footage from a sales point of view… so they probably make it through more than footage.

Obviously such a long review time is far from ideal, but we’ll see what happens with these new changes.

That’s right, and the requirements for video should be softer than for animation. We need big expenses and investments to make a shot that you will make investing a lot less.

Yeah, off hand I’m not seeing anything wrong with your shots, but I’m curious what specifically you think are wrong with the shots on the right? One thing to consider… search for car mechanic and you get 689 results. Search for Guinea Pig and you only get 49.

The more there is of something already, the less demand there is for more of that stuff… although the content itself will have an effect. I.e. business dudes shaking hands versus guinea pigs dressed as humans riding horses.

Oh man I feel so sorry! It hurts my eyes to see those leaves and cat being accepted and 4 of your staged shots being rejected!
Come on guys it’s clear that this is a reviewer problem! how can a reviewer do not notice the difference between a staged shot with models and a “point and shoot” one? I mean this kind of reviewing is bad for Envato too, Envato wants more quality but reviewers have no clue about what quality is!
Just look at the examples brought up from Framestock, Envato has just lost 4 potential great shots thanks to bad reviewers! And also lost some money because you know, staged shots with models are not really the same as shooting your cat on your bed or the leaves in your garden…Do I need to say that? Yes I do, because apparently reviewers don’t know it!
Suggestion: increase the quality of reviewers and the overall quality on the marketplace will automatically be better. Right now I see a lot of incompetence in the reviewing process and this is a problem for everyone.

Yeah, off hand I’m not seeing anything wrong with your shots, but I’m curious what specifically you think are wrong with the shots on the right? One thing to consider… search for car mechanic and you get 689 results. Search for Guinea Pig and you only get 49.

I am not about pig, i am about quality of my footages which was rejected a half year ago, and i spend for shot it a lot of money and in result i have rejects. And man who shot pig he maybe buy two pigs for 20$ and cheap camera. Why my footage rejected, because camera is jerky or noisy. Why reviewer didnt made soft reject with description (could you please edit you footage with warp stabilizer or noise reductor and maybe we can accept it in our marketplace) 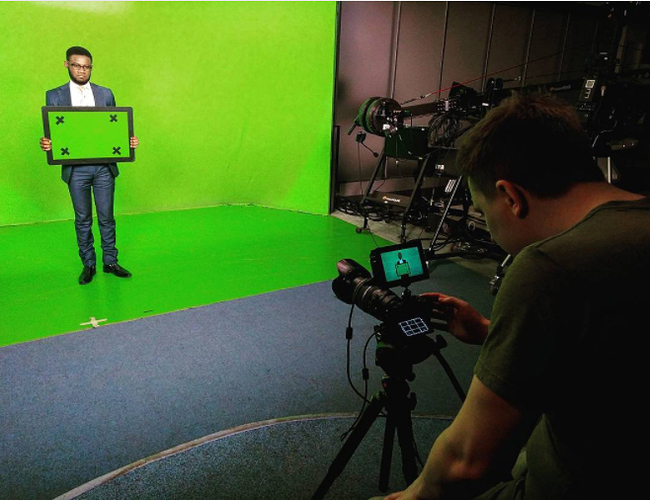 Of course this shot is going to be rejected, it’s way too green!

I want to tell one thing!
I will not be stopped by anything, I will continue to work hard and learn every day to be one of the best, but I hope that is happening now will stop once.

Well, you were the one that said you couldn’t afford a camera that doesn’t produce noisy images. The studio, external monitor, giant jib, green screen and big lens hoods are all very nice, but if it’s a noisy camera then its a noisy camera!

Ok, just seen the second shot… yeah, your Ronin is nice and what looks like an L lens or equivalent is very fancy… but what about the camera itself? Is it any good? You said it’s noisy, is it noisy?

Well, I do not want to talk about this anymore i dont have much time to do it i have to work. This dispute is not an intractable dialogue. I wanted to be heard bye.

James i want to tell to you because i think no sense to talk with others on this topic. I just wanted to say what the situation looks now. I want to give an example. We have Power elite authors on videohive who has accepted 1000 files of material every month without delay. While I have footages that I really shot really cool for the last 4 months. But these files will wait 2-3 months. And while I’m waiting, Power Elite authors earns money today. And I’ve seen the videos with the shaking of this authors more than once. I’m offended that the rules do not apply to them because they has the privilege because they is Power elite. I think It’s not fair to the authors who are not yet elite but they will be in the future

We have Power elite authors on videohive who has accepted 1000 files of material every month without delay.

What makes you think that? How do you know how long their files are taking to review?

I mean since you guys announced this, the review time got longer … so just find something else that works.

What would you suggest?

At this point I don’t understand if literally they can’t find a solution or they don’t want to find one. I guess they simply don’t want to, I can’t believe that with all their resources they can’t fix the problems! There must be some other secret reasons behind all of this for sure! Unless they don’t see a 150+ days long queue as a problem!

Why don’t you start picking some authors and let them review some items? I can offer myself to do that for a while, I’ve got a pretty fast internet connection too, 89.3mbps download and 19.15mbps upload. Train me and I can start from next week to help!

Come on guys, Envato has changed many lives across the world, made people millionares and now you can’t fix the queue?
I know you can do it!

I think the important question is, would hiring more reviewers be worth the cost.

Well, I guess they’re doing something wrong then. Bigger video stock markets have review times of 2-7 days and I guess they get just as many files in the queue. Don’t get me wrong I don’t expect instant review times, but they should be under one month. With over 150 days queue we are now not really far away from half a year. And that’s just absurd. And it doesn’t matter from what perspective you look at it, there’s no way to justify it.