For those who believe in fairytales ... I don't. What does it mean, Bros ?

For those who believe in fairytales … I don’t. What does it mean, Bros ? 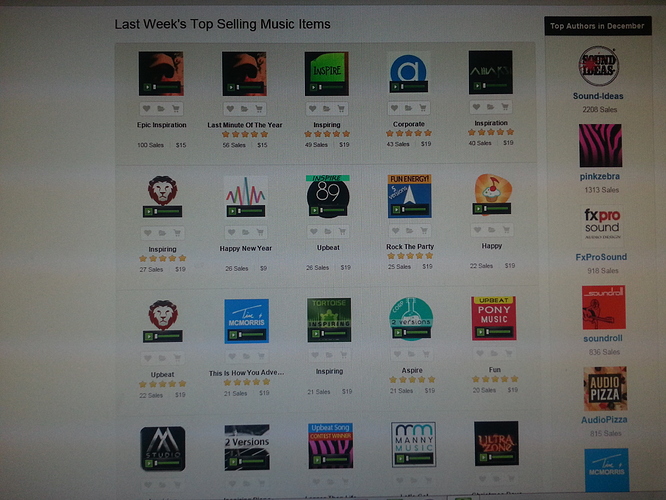 I am interested in fairy tales, would you explain me this one?

There are things that are impossible…

If you are talking about @leto, apart from being a great author and a hard worker, his track was used by the huge @FVS in his top seller Videohive item New Year Midnight Countdown.

As I said before, I like fairy tales and this is a magic one!

Involves two great authors, collaborating in a beautiful piece that happens to be very popular!

I Wish you, and all the authors, many sales and fairy tales!

Yes, before making snippy or accusatory remarks, perhaps people should take the time to think about the timing/circumstances. These were big sellers last year at new years. No foul play afoot.

Yeah , Bro ! I’m thinking a much time, analyzing statistics more times, but I can’t find the answer… and more… see… this track have only 4 sales this week despite of 1st place in top ! Statistics… I just want to AudioJungle be maximally transparent and clear !

They’re New Year tracks, so I wouldn’t expect them to have loads of sales this week. The same reason why pumpkins might be the top selling vegetable in the last week of October, but sell hardly anything in the first week or November.

Epic Inspiration is not a New Years track. It could be that a big company with the budget to do so, had to choose one song to buy as a theme song for a massive series of videos. Stuff like this has happened on CodeCanyon before where a company bought an item 1000’s of times in one week for a series of sites.

@leto is a stand-up guy! I expect no foul play and congratulate him on the success! All the same, I am interested in what happened to make “Epic Inspiration” explode the way it did!

Very smart idea, indeed! And it was this version that’s used on the Videohive item that’s sold 450+ tiimes in less than a month. Wow!

Although, I could well be wrong… I just kinda deduced this from having a snoop

He was clever and updated a non-new year track (possibly on the 28th of December based on when it was last updated), to make it a new year track. That’s the way to do it!

Let’s look to congratulate fellow authors on their success, not look for ways to tear them down or discredit them. When you inevitably experience your own success here, we’ll do the same for you.

I believe in fairytales, just because it would be boring without. Everyone can use a little help. But also believe in your own strenght and not watch others too much: is my motto. It’s also about perseverance(don’t know if I wrote it correctly) and a little luck. Wish you all the best for 2016☺️

Let the miracles will happen this year with us ! And all of that - only good ones ! Happy New Year !

P.S. I sincere apologize to @leto . Indeed he made timely changes in the track, which together with the excellent videohive project of @IronykDesign made a real breakthrough !!! My sincere congratulations !!!

Thank you MeGustaMusic for clearing this up and for the kind words! Much appreaciated

@MeGustaMusic explained it perfectly. Several videos used this song (the secound version) and one of them was very successful on videohive so most of the sales come from it.
Happy new Year!
@Grivanov appologies accepted

Thanks Phill for the kind words. Actually the second version is created few months ago especially for New Year countdown!
Happy new year