I think envato reviewer have lose their mind control, we have alot of flyers already on Envato but they are not approving our flyer, can any one tell us why? Note: Don’t teach us how to make uploading or any formalities suggestion. We have already uploaded alot of items.
Thanks 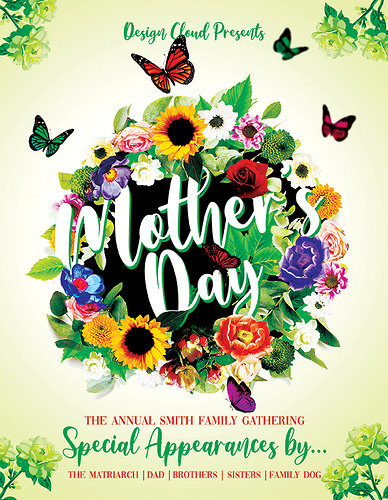 Looks very good, what is wrong with it, what was the reject reason?

1- readability
i am sorry to say just this but right now , main texts, titles included are hard to read … they are crossed by elements and the combination of the used font plus crossing objects make texts hard to identify …

3- globally occupation of the canvas
let’s face it , what u have at this stage is sort f crammed in the center but thus is pretty empty on the sideways … there is a disbalance resulting out of it …

4- lack of details
for u to have a work that looks much better and also to look way more realistic so that “people can buy it” , u need to introduce shadows and smootheners

6- hierarchy of information and valuing texts
what u have is not popping out enough in a general way , this is due to things i pointed out but also due to color choices and the fact that variations are lacking so that most important texts prevail and other ones become “secondary”

7- background
textures are very important they are not only much liked but they also give a hint of the work that u have done on your flyer, not to mention that they “fulfill gaps”

It’s a little rude to blame reviewers for your mistakes. They are truly professionals.
Here are the mistakes I see:

All the best to you