My first piece of music was rejected from Audio Jungle and I’d like to try again on another piece I recently composed. Any feedback would be great before I submit. Thank you in advance.

Hi Chris, really interesting track, I like it a lot. On first listen, the slow strummed chords at the beginning sounded a bit too late. On second listen, I didn’t mind it too much, but maybe try bringing them forward a bit so the finished chord lands nearer to the beat of the piano. Overall, I liked the loose feel in the timing, but I think it could be tightened up just a little bit on some of the more wayward notes, particularly some of the notes in the high pitch strings that begin at 1:36.

Is there anything you can do to mix in the muted NI Strummed Acoustic guitar samples at 0:32 a bit? In my opinion, it’s the only major dealbreaker.

Sorry for the clumsy use of an appalling - if you think about it literally - idiom, but I think this is kind of a case of throwing out the baby with the bathwater. This is just my opinion of course, but I think the new mix, whilst definitely clearer, feels too focused and harsh, while the old mix was smoother, more open and relaxed. That makes sense in my head, but forgive me if it sounds a bit wishy-washy.

Listening to those staccato string notes at 1:38 that I mentioned before, I think flattening the velocity and altering the effects isn’t the right way to go about changing the timing. I’m not sure that quantising is really the solution there either, although a little bit of iterative (not sure if it’s called that in all DAWs) or “human” quantise might help it a bit.
It’s tricky to give specific advice on a track without looking at the project to see what’s going on ‘under the hood’ - to use an Americanism - but it sounds to me like the attack of the samples is making the notes sound late. Try bringing some of the notes forward on the grid so that they are slightly ahead of the beat.

There’s a couple of other issues that I noticed in the new mix:

Again, I’m so grateful for your feedback, thank you!

Yes, I think maybe remixing after mixing all day I started to make some poor choices (ear fatigue!). I use Logic Pro X and I just bought NI Komplete. Some changes started happening without my knowledge, like on some tracks the plugin settings changed while I was working on other parts of the project and was not intentional.

With that being said, when you mentioned the timing of the high pitched strings, I thought you were talking about the stacatto strings as I solo’d them and heard lots of small errors. They are triggered rhythmic samples from NI Strings so I’m not sure how to adjust their timing (would you bounce to audio and move that file to line it up?). Initially, I think I had the midi info before the beat so the chord changes would be on time.

I have found it hard to learn NI software as there are not too many tutorials, any suggestions? Also, if you use Logic, I could share the file and you could see more if you’d like.

Truly, thank you so much for this great feedback! I really value and appreciate the support.

Hey Chris, I think you’re heading in the right direction with it. I’m a Cubase user, so I can’t help you much there I’m afraid. I have NI Komplete, but I’ve never really gotten into the nitty-gritty with those pattern-based string libraries that you mentioned.
One thing before I get into ideas for the strings timing; I’m missing the percussive ‘clops’ at 1:32. Sounds like you brought down the volume of them, but it’s my favourite part of the tune! It’s a really interesting little feature and I think you should bring it back to the front.

Regarding the high staccato strings, your idea about bouncing the part down to audio and moving it forward could work. Definitely an option, although I think there is an easier way to achieve it.
Is the part in question already on a separate track from the other strings which come before it? If they are, you can use this technique:
In Cubase, there is a great little option to adjust the playback timing of an entire track. It’s just a little slider in the inspector and you can set it either forward in time or backwards. 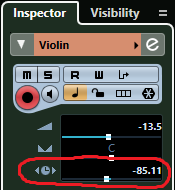 I think the same thing exists in Logic. Check out this page from the Logic user guide:

Shift the playback position of regions on the Logic Pro Tracks area using the Delay parameter.

I’m so grateful for your feedback, it has really pushed me to improve my mix to a new level. This is probably the furthest I’ve gotten in a mix, so thank you so much

NI was my first major purchase in the virtual instrument world, and it seemed like most libraries used NI’s engine, but I’m not sure it’s the best. Your instrumental mixes sound amazing! I was listening to the Four Seasons, and your string runs are so impressive!

You have such great ears! I forgot about the percussive clops, they are great! I will try to bring them back. I’m a little frustrated with the mix since I don’t remember intentionally altering that midi file. I’m either making mistakes from too much time or there’s an issue with Logic changing things on it’s own (I read this can happen when you open to projects simultaneously which I had done).

That fix is really helpful as I was unaware you could do that! As I listened back, I did not notice the timing issue. It is the same string samples and rhythm as what starts 0:49, do you feel it’s late then as well?

Again, you have been so very kind with your time. I don’t know if you give lessons, but I’d be happy to work something out if you think you have time. As I’m new to this world, it would be good to have someone to learn from.

Komplete is a great starting point and you can get great results from the Kontakt libraries that you get with it. It’s common thinking for new producers that these pre-recorded sample libraries are good to go straight out of the box, but they need properly mixing just like any other instrument that you would record for your track. EQ, dynamics, reverb, delay, saturation; all should play their part when needed and I would recommend using the effects plugins that come with logic rather than the built-in effects in the kontakt libraries themselves as they will likely give you more control.

I can’t really offer you much help directly, since I haven’t used Logic since it was owned by Emagic back in the late ‘90s! I think you would be teaching me mostly.
I started this thread of tutorials last year, which I’m sure you will find helpful though:

Here’s a place to put any tutorial videos and advice that might be useful within the realms of music production. So if you’ve come across any videos on youtube or links to educational websites about the production of music that you’ve found really helpful and would like to recommend, feel free to post them here. Don’t forget to leave a short description of the link unless it’s self-explanatory. Also, if you’re looking for tutorials on a particular topic to do with music production (i.e. compres…

Going back to your strings… to my ears, the only strings with major timing issues are the high staccato strings in the final part of the track. Try moving just those strings to their own part so that you can adjust them. Failing that, you could bounce them to audio as you suggested, make a cut at 1:37 and physically move the part left on the grid slightly.

Sorry for dropping off, I’m a music teacher and we just started school again and I’ve not had time to jump back in.

Well, I have lots of questions as I continue to learn so it wouldn’t just be Logic specific, but I do appreciate your feedback so far.

Can I ask you what libraries you use or if you record instruments yourself? I really liked the Project Sam and Spitfire BBC libraries I got for free. I am considering buying 1 serious library, but there are so many it’s hard to tell where to start.