Do i need to update my license?

I have a rather specific question. As a freelancer, I created a 2 min long animated infomercial. I then bought a track from Audio Jungle with Standard License since the video would only be shown to my customer’s clients which they would not have to initially pay for to see. A few months later I was contacted by an indie-film-festival that would like to show my video before their main movie during a film tour in Europe. I am now wondering if i have to extend my license or if this is still covered by the Standard Licence. When reading all of the information I believe this would still go under clause #3 and since it is an indie-film and that I would not have to extend the license, but I want to double-check to be sure!

Thanks in advance!
Stina

Indeed, the Standard license does cover indie film festivals. So in your case, there is no need to upgrade your license, as you correctly presumed.

Thank you so much for your quick reply ! I Believe this all makes sense since it is an indie film festival, and this is even if the audience pay to get in right? I mean, they pay to see the main movie and my movie is just shown before it. I just want to do it all correclty since it is my first time experiencing all of this! I have also tried to find AudioJunlges definition of an indie-film/festival but failed to do so… is that something you perhaps know? 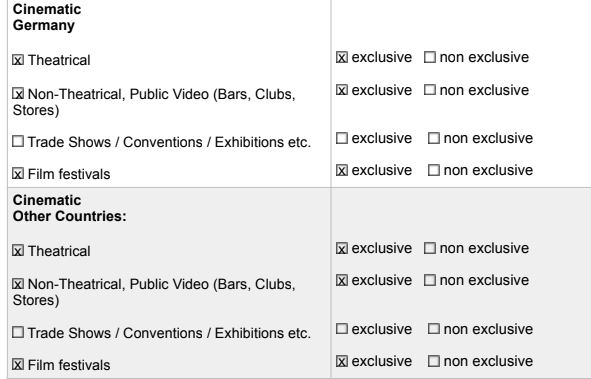 Whether the audience has to pay to get in is irrelevant for the Audiojungle licensing model.

Audiojungle offers no clear definition of an indie film/festival, as far as I know. But as long as the film is not nationally or internationally released in several theaters, but rather is screening during one event (even if the event itself is touring Europe), you should be safe.

If the film were to be distributed and released in theaters through traditional commercial routes (via major distributors), then you would need the top tier license. I don’t believe this is the case here, though.

This is of course just one author’s opinion, only Envato support can give you a binding answer.

As for the appendix you attached, unfortunately I wouldn’t know what to make of it, sorry!