Today I received a stinging comment on a purchased audio track that comes in two versions (a loop and a full version) in which the customer was complaining that the purchased files did not contain the exact version that is heard in the audio preview. Apparently, this customer worked the audio preview as-is (even with the one second gap of silence that bridges the end of the loop and the start of the full version) into his/her project and then officially purchased the item expecting to be able to simply replace the preview track with the purchased version. Problem is, the audio preview was not intended to be used as-is and this is strongly implied in the description, which states that there are two versions of the track and it specifically outlines the timeline (start and end time) of each version within the audio preview.

I understand it is common practice for producers to use our audio previews as placeholders in their projects before they purchase the appropriate license and replace the preview with the licensed version. This may not be feasible when multiple versions of the track are included in the audio preview, unless the client puts in work to splice the preview track into its component parts.

I’m not sure this is an issue that needs to be addressed, and if so to whom the responsibility falls (envato, authors, or customers). This has only been the second complaint of its kind out of over 1000 purchases of the item so it is fairly isolated, but it still bothers me that a second customer brought it up.

Any thoughts on this issue? As an author, how can we prevent confusion along these lines? Should I post a warning in the description? Should I provide the audio preview (non-watermarked) as part of the download package (I’m not a fan of this idea and I think it could create more problems)? Should I just absorb the hit (gracefully explain the situation to the customer) and move on? Not sure what to do here.

Definitely with you on your post, but can’t the buyer simply arrange the non-watermarked versions into the same order as you did when making the watermarked preview? Or maybe you could offer them this? This would fix the issue quite quickly.

I would keep a non-watermarked version in the same structure as the preview just in case. I don’t think it’s a big hassle for us authors to provide this version if prompted by buyers. After all, it’s very common for buyers to download the preview version and start working with it. You could communicate with the customer via email and send them the required version there.

My problem with the previews is that often buyers are unaware that some are comprised of many different versions, instead of one long track. I’ve seen comments on other items asking questions along the lines of why isn’t there a long version included like the preview?

I reckon some improvements are needed to make things visually easier to understand and to separate each version in the preview. Something like this could work: 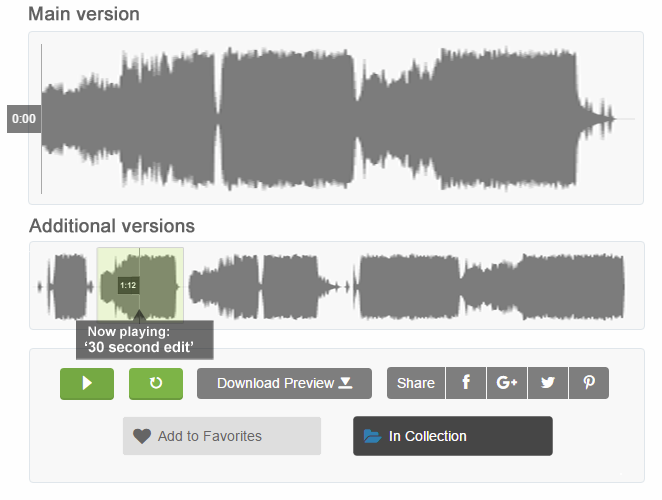 What would be required here is some extra information from the author when uploading. eg - name each version included in the preview, and specify the start and finish points for each version - a lot of us already do this in our item descriptions anyway. Authors can update their existing items with this information and it’s done. Though it would be quite a big undertaking to change all this

I stopped including edits and it didn’t affect my sales at all. Problem solved.

That’s another question - should we even bother with extra edits and versions? Does it increase sales?

I almost think it could reduce sales. Maybe it’s more visually appealing to see a single complete track in the preview window versus a squashed waveform crammed with different edits? Most of the top sellers seem to manage fine with a single version. And those that have extra versions were (for the most part) added after they were already popular.