Abandoned, Out dated no support or my favorite support remaining

Abandoned yes a lot of sources here have been left here with the developer gone…
Outdated yes as far back as 2012 with no updates or support not to mention were is the developer today?

Support what support I am finding that this is an unfair practice out of left field. This extra cost was added to product already purchased with no ability at any time, But to add just support time back to the product without having to repurchase. Not to mention scripts that have a large following and developers are turning off support here and on their web sites not answering emails or post and or taking any where from 2~7 days even weeks to reply…

I spend a lot of money here for myself and clients and in the past couple years I have seen a decline of value here among developers not making money and or getting what they need and drop out and users not getting there value in what they paid for.

I have seen well over 40% decline in developers leaving product not being updated since 2012 I think if EnvatoMarket is putting these extra charges upon us they need to reverse there role and start doing a major house cleaning of their own and removing and or dropping these developers completely and start really showing their true numbers. and whats this** 15,452 Scripts and snippets on Codecayon From $1.00** is crap that no one wants 99% of it is junk or abandoned not to mention at any given time I only see 2 starting at $1.00 under PHP as a current example as of 01-26-2016
This is just a quick look today

This is only my opinion and I feel if I am being put on a time limit for more money then so should the developers and EnvatoMarket if I get 6months of support from this from the beginning when this started then I expect 6months not 30 days not to mention I think it should have not affected previous purchases as these were already purchased and these licenses should not have been affected but what should have happened was from set date forward this practice put into effect on any future purchases.

I think it should have not affected previous purchases as these were already purchased and these licenses should not have been affected but what should have happened was from set date forward this practice put into effect on any future purchases.

That is exactly what did happen.

Whatever promise the author previously made was between buyer and author (nothing to do with envato and they could not enforce it) and still stands.

The new 6 month guarantee is different, as you said only applying to new purchases and something which envato can enforce, making it actually a benefit to the buyer

The new 6 month guarantee is different, as you said only applying to new purchases and something which envato can enforce, making it actually a benefit to the buyer

Yes I understand this and I do agree, But from the point of date when this new policy took affect it should not have retroactive back to previous purchases, these purchase should not have been affected with this policy but grandfathered in under there terms of purchase which at most point were unlimited support though I do understand the mass complaints that where a cause to enforce previous license purchased should have been protected to begin with.

All old purchases (pre change) have had the 6 month guarantee applied - however they still have ‘lifetime support’ if that is what they were sold with.

The only which matters is that if the author does not want to supply lifetime support and just pull the plug then they can (as was always the case before).

Okay that makes it seem much clear now… But as stated before I understand it and I do support it but if this extra charge has been implemented then how will envatomarktet enforce the support moving forward when one purchase a new product license and then 2 months in the developer drops out then what do we then get a credit, refund if support was purchased? How is this tracked or monitored to protect the user more so then the developer and or envatomarket?

That is a good question - I did ask this when the system started and as I understand it then it is treated on a case by case basis.

I would imagine it begins with them reaching out to devs and ultimately giving refunds but for absolute clarity I’d suggest asking support.

Hopefully it won’t happen too much and even those files removed can still be supported.

Here is just one of my points with support, Seems funny that today of all days I get an email with a post reply from a developer from 2 months ago 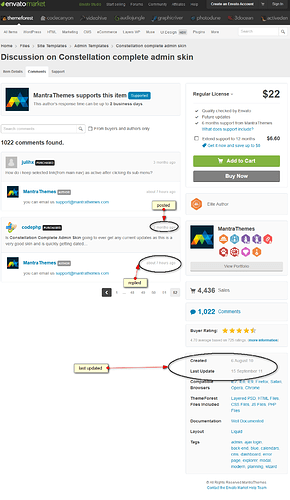 I agree that does seem strange. To a point I sympathize with authors of items that are 4 year sold etc. but do sympathize with buyers too ( I have personally bought more than most).

I think that as with almost every chnage envato make - it is a case of ‘lesser of two evils’ as rarely they will be able to please everyone.